skip to main | skip to sidebar

Those, who follow news on Central Asia know, that according to the parliamentary election results in Kyrgyzstan, the party supporting former president K.Bakiev had surprisingly got the majority of votes. But some disagree with the results, many of them are in Bishkek. 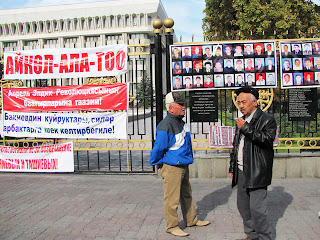 Two old men are relatives of those who died in Bishkek in April 2010, when policemen shoot people. Some of them just passed by and were talking on the phone, that was their last mobile call, their last words... In the background - photos of killed people and the Presidential Palace. 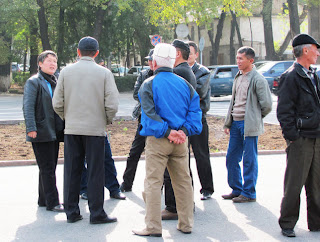 Protesters  in front of the Presidential Palace. 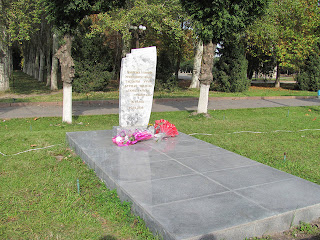 A tombstone in commemoration of those who were killed in April  revolution.
Posted by Ekaterina at 23:31 1 comment: Links to this post 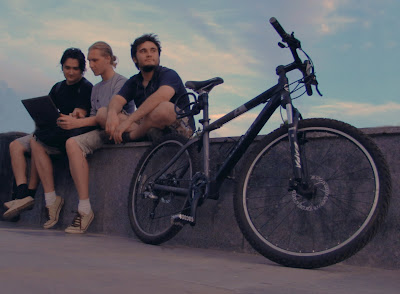 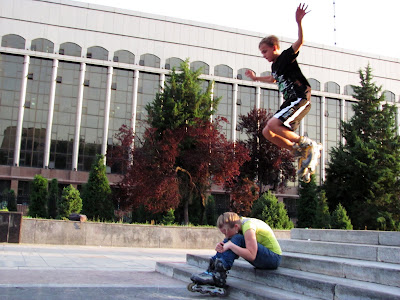 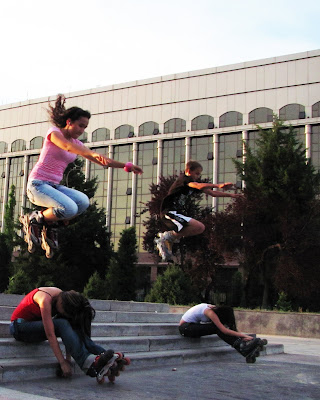 Posted by Ekaterina at 20:39 2 comments: Links to this post

Do people want to help or just to get popular?

First of all I want to thank all my friends and visitors of my blog, who answered my questions in the previous post. Here are results: the most of the interviewees think that Uzbekistan should have opened the border for refugees, some think that only for women with children and old people, other believe that all refugees should have an opportunity to find shelter in Uzbekistan. Several consider that Uzbekistan should have sent humanitarian aid only. The answers to the second question show, the majority of respondents think that only the UN troops can intervene in the conflict in Osh, however several people believe that it is still internal issue of Kyrgyzstan and the interim government is responsible for settlement of the conflict. Actually, I am glad that no one considered Russia or the US to be involved in the conflict resolution.

Well, during the last week I was analyzing the situation in Kyrgyzstan and tried to act. In contrast to Uzbek billionaire Alisher Usmanov and some other people, I do not want to write about all my activities. But I want to mention that some of my friends – “ordinary people” did not stay aside and helped the refugees (and again, in contrast to certain people they prefer not to talk about it). For instance, one of them initiated collection of money in her office and then the sum was spent for purchasing things, which were brought to the government of Uzbekistan collecting the humanitarian aid to refugees from Kyrgyzstan. However I must admit that most of my friends do not care about the situation at all.

Frankly speaking, I am fed up with that too. I have intentionally not read any news about the situation for the past several days. Because I got tired with all that twaddle around the conflict. Really… So many people are just wasting their time to chat about it. They don’t do anything; they are just chatting and re-posting the links on the Internet. For instance, there is a group on Facebook called Stop violence in Kyrgyzstan! They spread info about the peaceful demonstrations in New York and London last week. Of course I could not participate coz I’m not there. But I wanted to know how it went in order to write about. So I wrote to the group “admins” and surprisingly did not get any answer. Although I am one of the group members… I really cannot figure out why people spend their time for sending silly messages with explanations who the group is for and who should leave the group, but they do not have time to inform the group members about outcome of the event they initiated. I guess the guys have never heard about tools and tactics for advocacy… I have the feeling they just wanted to say to their friends: "hey, look at me, I'm so cool, I am doing this and that". Oh guys, it's ridiculous =)
Posted by Ekaterina at 15:38 2 comments: Links to this post

The situation in Kyrgyzstan seemed to be calm last week. I even wrote about it here on my blog. But things have changed...  My heart is bleeding for thousands of Uzbeks suffering now in southern Kyrgyzstan.
During the past four days I talked to many people about the situation in Osh and heard many different ideas how to stop the massacre. Please take a minute and answer a couple of my questions, which will help us to form the main opinion.

Posted by Ekaterina at 12:45 No comments: Links to this post

I made these pictures on June, 7 - exactly two month after disturbances in Bishkek, the capital of Kyrgyzstan. Some people are still afraid of going there and say that situation is unstable. But I felt safe and comfortable. 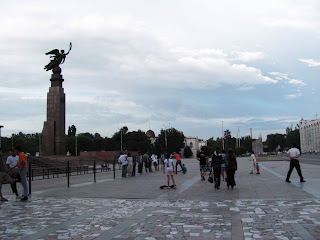 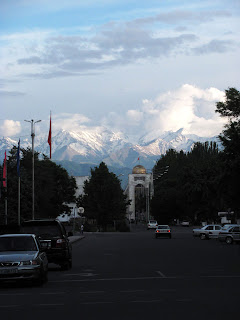 However some reminders of those events can still be seen. Even on the Presidential Palace: 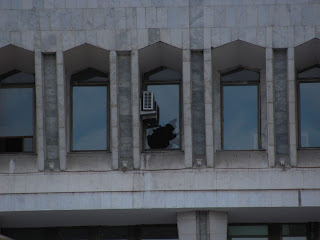 Raid on Freedom Flotilla. Was it a considered provocation?

Yesterday the Ministry of foreign affairs of Uzbekistan published a statement condemning the raid of Israeli army on the Freedom Flotilla.
As the official document states “Uzbekistan considers it necessary to prevent the growth of tension and escalation of violence, which may have the unpredictable consequences”.
It is one of the cases when I totally agree with Uzbek government.
However some of my friends say, it was a big provocation from Turkey and Israeli government gave to the Navy a legitimate order. People on the ships knew that they had no right to go through the official naval blockade, because the San Remo Manual on International Law Applicable to Armed Conflicts at Sea, 12 June 1994, states that “Merchant vessels believed on reasonable grounds to be breaching a blockade may be captured. Merchant vessels which, after prior warning, clearly resist capture may be attacked (paragraph 98)”. So from the legal point of view the Israeli government was right.
But we all remember how both world wars started – with the silly provocative actions. So, do we really need now to look for a guilty and aggrieved side? Or it is finally the right time to START THINKING and to make a compromise?
Posted by Ekaterina at 16:30 4 comments: Links to this post

Payment revolution? No, thanks!

Nobody can be surprised by a plastic card in Uzbekistan today. But it is still surprising that plastic cards here is a way of making people’s life more complicated, rather than easier.
Normally people look for places where they can buy something they like, but here in Tashkent it’s quite usual to look for a shop where one can pay by a credit card. Some shops do even have a sign on their doors “We accept plastic cards”.
However, as to purchasing of bigger things such as furniture, TV set, microwave, etc. it is much cheaper to buy them in cash.  We don’t have shopping malls here in Tashkent, but there is a long street where hundreds of small shops selling household appliances and equipment are located. And no one of these shops is ready to accept payment by transfer or credit card yet. Of course it’s possible to find companies working not only with cash. But prices are different if one pays by cash and credit card. For instance, a refrigerator in one of the shops costs 1,4 Million UZS (about 700USD) if paid by “real money” and over 2 Million UZS (approximately 1 000 USD) if one wants to pay by credit card. I wonder if there is anyone using the second method of payment...
And what absolutely funny and at the same time stupid about the entire story with plastic cards is that all of them have standard PINs: either 1 or 2! Only one figure! That’s all. Of course you can ask your bank to change the code, but does it really matter, if a seller does not ask you to enter your pin, but says loudly: “What is your pin-code?”
Thus, now you know what to do if you find a plastic card in Tashkent…
Posted by Ekaterina at 15:47 2 comments: Links to this post

Ekaterina
I'm a roaming cowgirl riding all day long, Tumbleweeds around me sing their lonely song. Nights underneath the prairie moon, I ride along and sing this tune.